Run4LifeIndy and Scotty’s Brewhouse pair up for Haiti Relief

February 2010. In response to the current crisis in Haiti, Run4LifeIndy (R4LI) has set a goal to raise a minimum of $13,100 within 100 days prior to the 13.1 Indianapolis Mini Marathon. Fundraising began Saturday January 23rd and will continue through Saturday May 8th. All contributions will be donated to Pierre Garcon's association ‘Hoosiers Helping Haiti’. Twitter and Facebook pages have been set up where Mini participants and supporters of the cause may join the Run4LifeIndy team in this effort.

Scotty’s Brewhouse has joined the cause. Scotty’s Indianapolis North (3905 E. 96th St.) and Scotty’s Downtown Indianapolis (1 Virginia Ave.) locations currently have collection jars at their host stands where customers can donate directly to the association.

“Immediately following the earthquake in Haiti, we received multiple requests from our staff wanting to do something, anything, to contribute to the Haiti Relief,” said Amber Martin, Scotty’s Brewhouse Beverage and Promotions Director.

Want to donate in a different way? Scotty’s Brewhouse is also selling t-shirts for $20 with $5 of every t-shirt sale going directly to the American Red Cross to support aide to Haiti. You can purchase the shirt at any Scotty’s Brewhouse location or online at www.scottysbrewhouse.com. 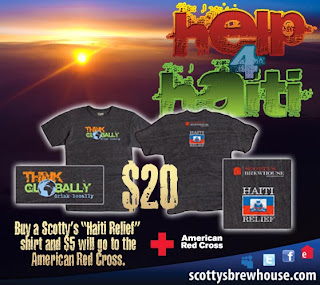 “This was a global crisis that needed help and attention,” said Scotty Wise, owner of Scotty’s Brewhouse. “If we can’t be there to physically help, this is the next best way for us to get involved.”

Run4LifeIndy has also partnered with Scotty's Brewhouse to host a Pre-Mini Pasta Tweetup at the downtown Indianapolis location on May 7th at 6:00 pm. Scotty's has offered to donate a percentage of the proceeds from this event to the cause.

Run4LifeIndy was founded as a fund raising campaign to benefit the less fortunate. Co-founders Brooke Randolph and Suzanne Zaleski are participating in this year's Indianapolis Mini Marathon on May 8th along with many Scotty’s Brewhouse employees. To find out more log on to http://www.run4lifeindy.org/ or www.scottysbrewhouse.com.
Posted by scottysbrewhouse at 10:28 AM No comments:

2. If they show pictures of the City of New Orleans right after Katrina, drink 1

3. Every time they say how much the Saints mean to the City of New Orleans, drink 1

4. Every time the words "tragedy", "flood", or "devastation" are used, drink 1
5. Every time they talk about how good Reggie Bush was in college, drink 3

6. If they show Kim Kardashian in the stands, drink 5

7. Every time they show a picture of Reggie Bush with a bat or say "bringing the wood", drink for 5 seconds.

8. Every time Reggie Bush gets negative yardage trying to run around in the backfield a bunch and outrun the defense, drink 1 and turn to the person next to you and say "I told you Vince Young should have won the Heisman that year"

9. Every time Reggie Bush gets up and flexes his arms in that pose he likes to do, drink 1

10. If they mention Tim Tebow for any reason, funnel a beer

11. Every time they say that "it's destiny for the Saints to win", drink 1
12. If they show footage of Katrina survivors at the Superdome, take a shot of cheap liquor

13. If they call Saints fans the most passionate fans in football, drink 1

14. If they say that the Saints, Saints fans, or the City of New Orleans "deserve" a Super Bowl victory, drink 1

15. Every time they say how good of a story the Saints are, drink 1

16. If Jeremy Shockey pretends to be hurt after dropping a pass, drink 2

17. If they mention the Saints beating the Falcons in 2006 in the first game after Katrina in the Superdome, drink 5
18. Every time they compare hurricane Katrina to the Haiti earthquake, funnel a beer and yell "bullshit!"

19. Every time they mention Drew Brees as the Mardi Gras king, drink 1.

20. Every time they show Archie Manning, drink 1, and mention how bad he sucked. If they show old footage of him on the Saints, drink 5. If they mention how tough of a decision it was for him as for whom to cheer for, drink 10.

21. Every time they show a saints fan yelling "Who dat!" Or a sign/shirt saying the same, drink 1.

22. If they show Chris Paul at the game, drink 1 and mention to someone how much better he is than Marvin Williams.

23. If they show former Mayor Ray Nagin, drink 5 and then punch someone in the face.

Other Rules not involving the Saints:

1. Every time they show Eli Manning in the press box, drink 1

2. Every time Pierre Garcon is mentioned with Haiti, drink 1

3. If Brett Favre is mentioned for any reason, drink 1
Posted by scottysbrewhouse at 12:23 PM No comments: 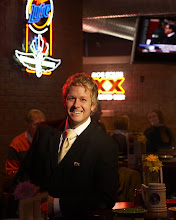